Coming in for a landing

We have been bush camping in the heart of the Okavango Delta for two days and already I have more to tell than I can write. But first let me just say: I can’t believe we’re really on safari! I’ve dreamed of a trip like this since the very first time I saw Mutual of Omaha’s Wild Kingdom with Marlin Perkins and Jim Fowler—back when it was my job to change the channels using an actual knob on the family TV set.

The animals and the scenery are just as cinematic and heart-stirring as I remember. But sad, too, of course, because the cycle of life is evident everywhere, and it’s hard not to wonder where in the cycle you are. How close is death?

That’s what I was thinking about while we were on our first game drive through the camp’s 432,000 acres with our guide, Ketshabile (who likes to be called TJ at work), and our tracker, Atlang (who prefers AT). It’s the dry winter season, so it hasn’t rained for six months and it won’t until sometime in November. Maybe.

AT and TJ take us across a lagoon

Driving through the wide-open plains, it makes your mouth dry to look at the toasted grass and the sun-fried acacias. And the woodlands at the edge of the meadows are even crunchier and dustier. So it’s no surprise the people here greet one another with a hearty Pula!, which means “rain” and is the name of their currency too.

Despite all this desiccation, we are never far from a marsh or a lagoon (which we cross on creaky two-track bridges made from tree trunks). This is the delta, after all, and that means we’re sure to see wildlife of every stripe and color coming to quench their thirst.

We’re on this adventure with our sheep-farming friends from New Zealand, Mike and Susan. You would love Susan. I’m sure everyone must. She’s this lithe and elegant creature, like a great white egret. But her personality is much more than that. She’s more like a fun and co-conspiratorial big sister. And when it comes to sizing up the snobby, self-important tourists who cross her path, watch out. She’s like a malachite kingfisher batting its prey on a tree limb.

Mike, on the other hand, is reserved. I’d say he’s more like a giant eagle owl. You get the feeling he hears and sees all, but for the most part he’s mute. Once in a while, though, you can make him laugh—even at himself—which is a terrific and rare sighting because he tries to hide it. At first his shoulders start to heave silently. Then a spectrum of crimson rises, collar to forehead, and by the time it starts to turn plum, he bows his head and covers his mouth with a closed fist. All of which he does without even a titter. But, eventually he has to inhale, and that’s the time to watch closely, because if he can’t keep all that frisson down on the exhale, it explodes in one enormously contagious belly laugh. Sometimes there are even tears. Which, really, you wouldn’t expect from an owl at all.

Anyway, as I was saying, the four of us were on a game drive, a short one to get us into the camp routine. While Susan shot hyenas and bee eaters with her long lens, Mike marked them on a camp-issued checklist with a golf pencil. Chris and I were busy playing tug-of-war with the one functional pair of binoculars we had (I dropped the other pair) when TJ, who’d been searching for a good spot for sundowners, suddenly stopped the vehicle and grabbed the handset from the two-way radio on the dashboard.

“Kwara, Kwara, Kwara!” he called. As dust from the wheels plumed and then settled around us, so did the smell of something inexplicably foul. The four us, perched behind TJ in open-air tiered seating, covered our mouths with dusty shirt collars, scarves, and hands—anything we could find to filter the stench.

A woman from camp radioed back to acknowledge TJ’s call, and the two quickly exchanged information in Setswana, their common language. AT pointed from his jump seat at the front of the hood to a large dark spot in the grass, and TJ advanced the vehicle for a better vantage point. It took my brain a few seconds to sort out the scene, which I finally realized was the head of a mature elephant, its face melting off in blobs of foam as it was being devoured by a froth of maggots. 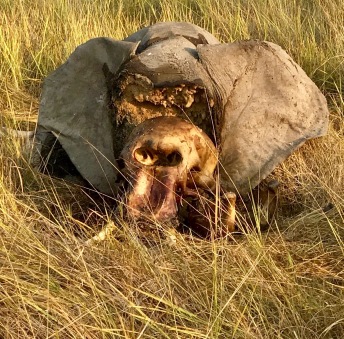 It was a hot afternoon here in Botswana—over a hundred degrees—and, let me tell you, the smell of that rotted elephant head had ripened accordingly. I doubt you would have enjoyed a front-row seat to such a gruesome scene, but you have to admit it is fascinating how those squirmy little Rice Krispies can dissolve an elephant, one bite at a time.

I know what you’re thinking. AT and TJ were wondering the same thing: Who else was making dinner out of Dumbo? While Susan was busy squeezing off a few more close-ups of the maggot foam, AT and TJ were strategizing in Setswana. Then AT hopped down from his jump seat, folded it up against the hood, and slid into the front seat next to TJ.

What a picture these two make. They are nearly opposites. TJ is compact, solid with muscles, and stern, while AT, in his floppy Gilligan hat, is soft and round and quick with a sloe-eyed smile. At first I thought he seemed far too laid-back to track animals with any acuity. But, like a magician, he has conjured birds and mammals from thin air by showing us what is hidden in plain sight. 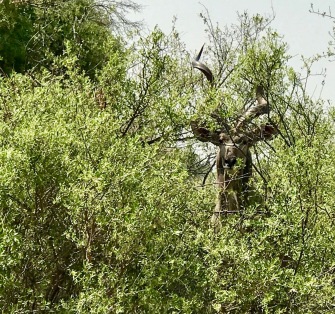 Which is what he was doing now. After quietly consulting with TJ, he turned to face us—our mouths and noses still covered—and pointed to a sausage tree not more than a hundred feet away. Then TJ, in a low voice, said, “Keep your arms and legs inside the vehicle and do not stand up. Just over there is a male lion, and he has been feasting on this animal for days. I do not think he would appreciate how close we have come to his meal. So we will now move away slowly.” With that he put the jeep in reverse and we left the scene.

I thought we’d beeline it for the sundowners, as I was past ready for a G&T. But then TJ pulled right up to the sleeping lion. Within fifteen feet. That seemed dangerous to me, but he assured us that the lion was satiated and bothered by no one. Why should he be? He is, after all, without predators and lives in a game reserve that hosts guests armed only with cameras.

He really was regal, this lion, even if his mane was ratty and he heaved like a passed-out drunk. It’s strange. Here was this fierce and majestic beast who could permanently remove my face with one swipe of a paw, but to see him asleep and vulnerable like that, all I wanted to do was scratch him behind the ears like a house cat. Maybe even rub his belly and pick the tick off his ear. I wonder if he would have liked that—a nice, soothing pet and groom before he turned me into a post-pachyderm snack? Thankfully, we’ll never know.

I’ll send another dispatch soon. It’s an hour until dinner with all the other guests and I’m still covered in dirt and haven’t figure out how to shower outdoors with baboons eyeballing me from the trees.