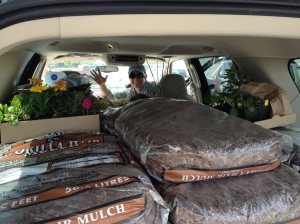 In a state as vast, remote, and sparsely populated as Montana, square-foot gardening may seem absurd. I know it probably does to many of our North Fork neighbors. In fact, one thought our little veggie-plot-to-be was a horseshoe pitching box. At twenty-four square feet, the raised bed looks not unlike a postage stamp in the middle of an 80-acre envelope.

So why so small when there’s so much land? Well, there’s lots of reasons, but the most convincing one for us is that this approach to organic vegetable gardening (introduced by Mel Bartholomew in the mid-70s and used worldwide, particularly in urban situations) is low maintenance and easy. Just build a frame, put in some good soil, separate the space into 24 square-foot sections, and add flowers, herbs, and vegetable plants.

Amazingly, our little plot is home to approximately 85 plants, some of which will mature quickly and be re-seeded or rotated out and replaced with something else; others will take until fall to fully ripen. So far we have sugar snap peas, beets, rainbow swiss chard, onions, spinach, spearmint, basil, cucumbers, yellow straight-neck squash, lettuce mix, garlic, and fennel-leaf dill. Plus some marigolds to repel nematodes, squash bugs, and whiteflies. 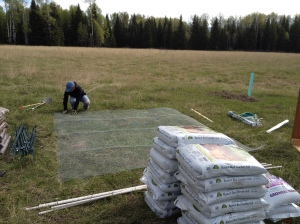 Metal netting keeps the critters out

Montana has a notoriously short growing season of 90–120 days, so we decided to start with plants rather than seeds to give ourselves a head start, especially since we were a week behind getting the garden in. So far the biggest challenge (besides finding a reliable water source) has been planning our defensive strategy against unwanted nibblers, including ground squirrels (there are hundreds of these things with elaborate tunnels criss-crossing the property), deer, elk, and whatever else we’re not aware of yet that enjoys dining on tasty baby greens.

Our first line of defense is metal netting that we laid under the raised bed and the three-foot walkway surrounding it. We then erected a chicken-wire fence secured with a sturdy(ish) gate built by Chris. Because frost is a threat during the entire growing season, we also added pvc pipes to support a floating row cover that traps heat and protects against strong winds. I actually recycled our well-worn wood tarp, which needed some mending with duct tape. It looks pretty hillbilly, but it gets the job done.

A “blanket” for frosty temps

The whole project took less than a day, and ongoing maintenance should be minimal. With this type of dense gardening, weeds are sparse because of the canopy created by the mature plants and the friable soil that keeps them from becoming entrenched and difficult to remove. There’s no tilling, sprinkler systems, or backbreaking labor, so we should have time this summer to enjoy mojitos made with fresh mint from the garden.

That said, I have a sneaking suspicion that the elk, deer, and ground squirrels who watched us assemble our patch of veggies are probably snickering to themselves right about now. And we could soon be posting pictures of devastation. 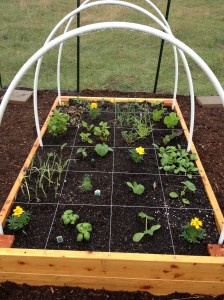