Ireland: Escape to the Emerald Isle

First of all, let me begin by pointing out a change in our blog’s subtitle. As you can see, it now reads “and other postmarks” instead of “a yurt, a skirt, and a shirt.” We’re broadening the theme because we want to share our travel and other adventures with you, without redirecting you to new blogs. Plus there’s the other big news: we’re building a cabin. I know, I know. You’re thinking, “What pansies! They spend four months in Italy and now they can’t hack living in a yurt.”

Well, maybe. But we still love our Mongolian tent and we’ll be living here all summer, digging a well, planting another square-foot vegetable garden (hopefully to better effect this time), and overseeing the construction of our rustic-looking cabin a few meadows away. I don’t think we’ll lack for adventure and mishap, so we hope you’ll keep reading.

And now, on to Ireland, where we spent eight lovely days with Chris’s parents, touring the southern portion of the country. Despite the chilly, incessant wind, the rain, and even the hail, we were captivated by the Emerald Isle and its 50 shades of spring green. Our first stop was County Wicklow and the Powerscourt Estate. Having  landed in Dublin that morning, we fought our jet lag with a long walk through the estate’s 250-year-old formal gardens and even climbed the Pepperpot Tower, said to have been modeled after a pepper pot on Lord Powerscourt’s dining table. I suppose that makes for a cute story, but it looked like a standard-issue medieval tower to me. After this small physical feat, our bodies were finished humoring us and we hit the hay within the hour. 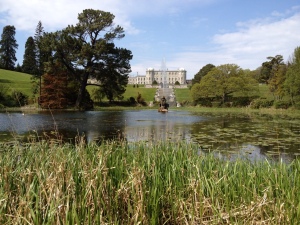 The next morning we set out on a drive through the countryside, a treacherous ordeal when the roads are wide enough for only one vehicle but meant for two, and you’re driving on the wrong side of the road, on the wrong side of the car. It’s hard to know just how much clearance one has between these one-horse-wagon roads and the hedge-lined rock walls next to them, so we made a few swipes just to be sure. If you’re wondering, it’s about two feet. But I don’t recommend this method of discovery. It’s quite expensive.

When we weren’t double-checking our paper map against the GPS (who sounded not unlike Marilyn Monroe singing “Happy Birthday” to President Kennedy), we took in the quintessential sites of Ireland from our car seats: gentle green hills sectioned off by neat hedgerows, and dotted with lambs so fuzzy, frolicky cute that I winced at their inclusion on the dinner menu later; a roiling sea that sparkled in the fleeting rays of sunshine; and a cavalcade of bushes with bright yellow flowers that hugged the roadside and crept across the land. When we stopped at Brittas Bay to get a closer look at this cheerful plant, and to touch the waters of the Irish Sea, we passed an old man trekking through the dunes, firmly gripping his woolen cap. 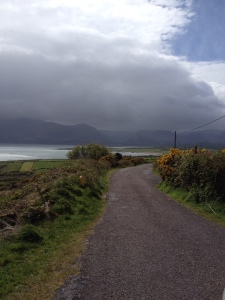 “She’s a-blowin’ a bawrley hawrn, lad,” he called out—or something like that; between the wind and the man’s thick brogue, we could hardly understand a word he said. Maybe he was speaking Gaelic, as most people do in this part of the country. Chris smiled politely and asked him about the yellow bushes, which by now I had observed smelled surprisingly like coconut. The petals were delicate like those of a sweet pea plant, but they were nestled in nasty thorns.

“Those are wnsnsrlsh,” he said.

We looked at him blankly.

“Aye, furlzlnsh er slicnershirsh,”  he said emphatically, eyebrows raised. Chris and I looked at each other. Nothing. Then he said slowly, “GORRSH!”

“Ohhh, right. Thank you,” we said, nodding as if we had finally understood. (Thanks to a Wikipedia search later, we found out that gorse is ubiquitous in Ireland, invasive even, and it’s what they use to make those quaint hedgerows and even to feed livestock.) 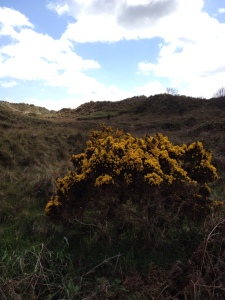 It wasn’t the only time we’d been unable to understand a fellow English-speaker. In one small village off the beaten path we stopped for breakfast. I ordered first, a poached egg and toast. The waitress responded,  “No butter.”  I nodded, thinking it seemed reasonable enough. Poached eggs aren’t usually prepared with butter, though I would have liked some for my toast. Susie ordered next, an omelette, and received the same response—as did Chris with his omelette and John with his “parrige.” As soon as the waitress left the table, we leaned in toward each other. “Why do you suppose they don’t serve butter?” I asked. “Beats me,” Chris answered. “Seems like we’ve seen plenty of cows in the countryside. I thought Ireland was known for its butter.” Strange, we agreed. A few minutes later the waitress returned with our plates, each accompanied by several pats of foil-wrapped butter stamped with green shamrocks. It wasn’t until we’d taken a few bites that we realized what she’d said. No bother!

Anyway, back at Brittas Bay the wind was indeed kicking up a barley horn (or gnarly storm?). Although it’s said in many places around the world, it seems particularly true in Ireland: “If you don’t like the weather, wait ten minutes; it’ll change.”  We continued down the road as the sky turned black, and I noticed a road sign that said “Avoca: Filming location of ‘Ballykissangel.'” If Chris hadn’t made me watch an episode of this 1990s BBC comedy set in an Irish village, I wouldn’t have realized the significance of what I’d read. We quickly made the turnoff, nearly a second too late, and ducked into the as-seen-on-TV Fitzgerald’s pub for a pint and a chat with some vacationing Aussies.

Our final destination that day was Cashel, two-thirds of the way from Dublin to Cork, in County Tipperary. In the Irish language, “caiseal” means “stone fort,” for which the town is named. Legend has it that the Rock of Cashel landed where it is now when Saint Patrick banished Satan from a cave twenty miles away. It’s also said to be the very place where St. Patrick converted the King of Munster in the fifth century. Later, in 1101, another King of Munster donated his fortress on the rock to the church, and to this day remnants of a mammoth twelfth-century cathedral remain. Fortunately, this is the view Chris and I had from our room.

We stayed at the Cashel Palace, a worn but pleasant place built in 1730 and steeped in history. With dark and stormy weather as a backdrop, the old hotel looked like the setting for Nancy Drew’s Haunted Mansion. Two fireplaces took the damp chill off the  lobby, and large pine-scented candles masked the smell of burning peat and centuries-old must. A grand tea room led to a garden featuring gnarled old mulberry trees planted the year of Queen Anne’s coronation, and down the creaky stairs to the basement sat a tiny pub, hailed as the very spot Arthur Guinness first concocted his famous brew now heralded as the “wine of Ireland.” Across the hall was the Bishop’s Buttery, a snug, fire-lit restaurant with rock walls and wide-planked wood floors. The Buttery staff cheerfully granted Chris’s request for the special preparation of his father’s childhood birthday dish: chicken, mashed potatoes, and peas. Even if the meal wasn’t quite the same as Grandma Graff’s, we enjoyed an evening of stories and shared desserts.

On the way to Kenmare the next morning, we passed a hearse. It had windows, untinted, all the way around. Even in the back. Watching the black coffin with brass handles zip down the long and lonely highway, destination unknown, we wondered if such a sight could be an omen. Since John had survived his seventy-third birthday, and we’d all cleared those highway scrapes with the hedgerows, we decided it must be an auspicious sign, a reminder to feel fortunate for one more day. As the vehicle faded into the distance, I recalled a saying I’d seen in Dublin— “May you get to heaven an hour before the devil knows you’re dead” —and I wished the passenger godspeed.

The view from Slea Head Drive

Ireland is full of witticisms, one-liners, and charming anecdotes. I’ve never met more cheerful people, despite the newspapers filled with stories of suicide, financial ruin, and alarming emigration rates. The country has a long history of well-known hardships, but as any good comedian can tell you, grit makes the pearl. Even the most mundane of polite conversations with taxi drivers, hotel staff, and pub patrons is peppered with whip-smart remarks made to make you smile if you’re alert enough to keep up. I found I often wasn’t, failing to get many of the jokes until it was too late to offer up my own halfway witty repartee. Irish humor is quick and dry. Sometimes just plain silly, as with the posters I saw in a little breakfast joint in Abbeyfeale. At first I dismissed them as tourist-trap sap. With titles like “Dear Mother” and “Dear Son,” they appeared to be Precious Moments products. But then the first line of mother’s letter to her son drew me in: “It’s been too long since I’ve seen your face, but every time I feed the pigs I think of the last time we ate together.” And the postscript added, “The doctor says Grandfather suffers from  ‘alcoholic constipation.’ He stops at every pub he passes.” A sort of gallows humor that has no doubt served well a long-suffering people.

The most spectacular highlights of the trip came near the end. Dingle Peninsula and the Slea Head Drive are not to be missed. If you’re looking for verdant hillsides at the sea’s edge, dramatic cliffs, and a sense of ancient history, this is the place to see. You can almost hear the Irish drinking songs, ballads, and laments drift out of the crashing waves. The stories of lost love, battles, oppression, famine, tested faith, and even creatures of the sea.

‘Twas Friday morn when we set sail
And we were not far from the land
When the captain, he spied a lovely mermaid
With a comb and a glass in her hand

Couple that experience with Adare Manor, Ireland’s Downton Abbey, and it feels like another time. Located near the top of the Ring of Kerry, on the River Maigue in County Limerick, Adare is picture-book quaint. Its streets are lined with thatched cottages, boutiques, historic monuments, and colorful gardens. But the grande dame, to be sure, is the Adare Manor, a neo-Gothic manse turned luxury 5-star hotel tucked away on an 840-acre estate. Lord Dunraven began the monumental project in the 1830s, and it was completed thirty years later by his son. One can easily see three decades of commitment to eccentric detail in this elegant structure and its formal gardens, which now overlook an 18-hole championship golf course. Our time there was too short, but there’s always next time.

Meanwhile, back at the yurt, Chris is researching how to dig our own sandpoint well, and I’m trying to figure out how to mitigate the veggie-stunting calcium in the water. So it’s back to homestead living for us, and we’re enjoying the challenge. As Chris’s mother so aptly said during our time in Ireland: “Live as long as you can learn.” At this rate, we should make it to a ripe old age.