Note: This post is part of a series on Bali. To start at the beginning, see The Bali Diary: Day 1.]

We may as well have had three heads the way motorists stared at us. First of all, I think it was mildly shocking for them to see bule (boo-lay; white tourists) on this part of the island. Second of all, walking is just plain ridiculous. Nearly no one does it and there are no sidewalks or even beaten paths along the main thoroughfare, which those ubiquitous motorbikes zip up and down all day and most of the night. Beep beep, beep beep! 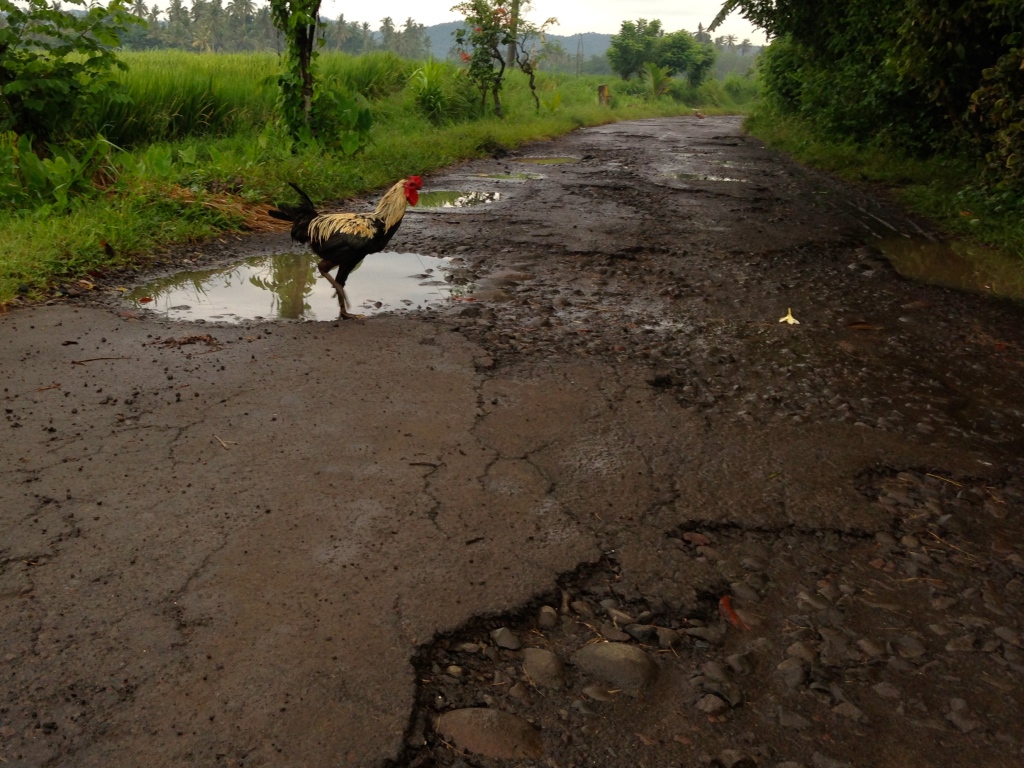 We walked single file on the coarse volcanic gravel until we found a quiet narrow road to turn down. Then we bolted from one side of the raucous street to the other and started down the path, where we immediately came upon a cocky rooster crossing it. Yes, I asked him why. No, he didn’t answer.

“Now this is what I’m talkin’ about,” Chris said. Within a quarter mile it felt like we had walked into another world. The jungle of humanity receded into a botanical jungle, which then opened up into lush rice fields and precious silence, relatively speaking. Now we could walk down the middle of the road without a care. We stopped and took in the vista. Acres upon acres of terraced padi fields.

“Look at the ducks,” I said, pointing up the road. We’d read that ducks are put in flooded rice fields to feed during the day. They follow a stick with a little flag tied to it, which is then stuck into the ground for the day. The birds hang around the stick until sunset when they are led home again, creating little duck parades that are said to be one of Bali’s small delights.

We continued up the sloping road. Without benefit of shade, it was really hot. Really humid. Sweat dripped down my back, and the red hyacinth I’d tucked into my floppy straw hat was beginning to wilt. “How much farther,” I ask Chris. We’d planned to walk all the way to Antosari, but we hadn’t agreed on whether Antosari was an actual village or a region, like Big Sur. It felt like we were looking for the Land of Oz. “About four kilometers,” Chris answered. 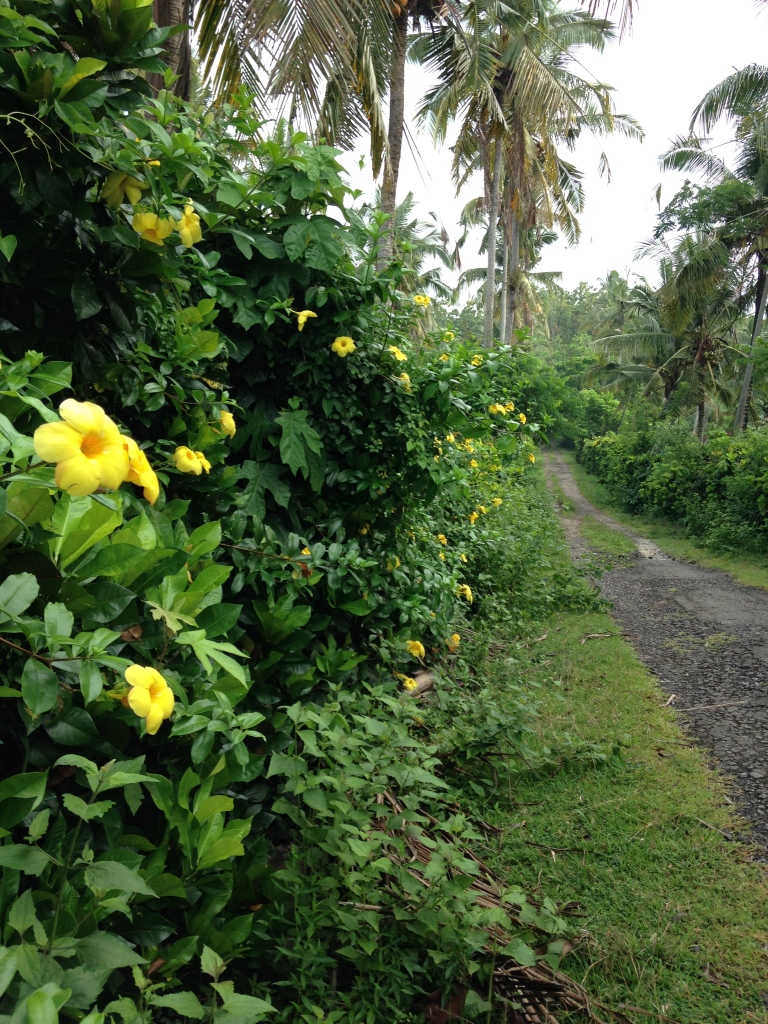 Right then a small man stepped out into the road, followed by three barking dogs, all variations of the ever-present black-and-white island dog. “Hallo,” he said. I noticed that many of his teeth were missing, yet his smile was quick and easy.

“What’s your name?” he asked in English. We exchanged introductions, then he asked, “Where you stay?” At first we tried to answer accurately: down the road to the right, near the ocean, etc. The man looked confused but still smiled. We didn’t know enough Balinese to answer accurately, and our villa doesn’t have an official name. Finally we gave up and just pointed down the road.

“Air,” I said, which means water (not air) in Indonesian.

“Ah! Yes, yes,” the man nodded. We chatted for a while, and he told us that he was  a retired travel agent living in Denpasar. This was his family home. The little shack looked similar to others we’d seen on the side of the road. Small and old and humble. But the family temple, which nearly every Balinese home features, was ornate, well maintained, and surrounded by a wall. I couldn’t see much more than the tops of the shrines, made of elaborately carved stone and topped with a thatched roof.

As we made our way to Antosari, which the man confirmed was indeed four kilometers away, we met many villagers on the road. They stopped what they were doing and asked us the same questions: What is your name? Where are you staying? Then they would tell us about themselves, sometimes in English, sometimes in Balinese. We would all smile and nod as if we understood each other and then we’d continue our trek. 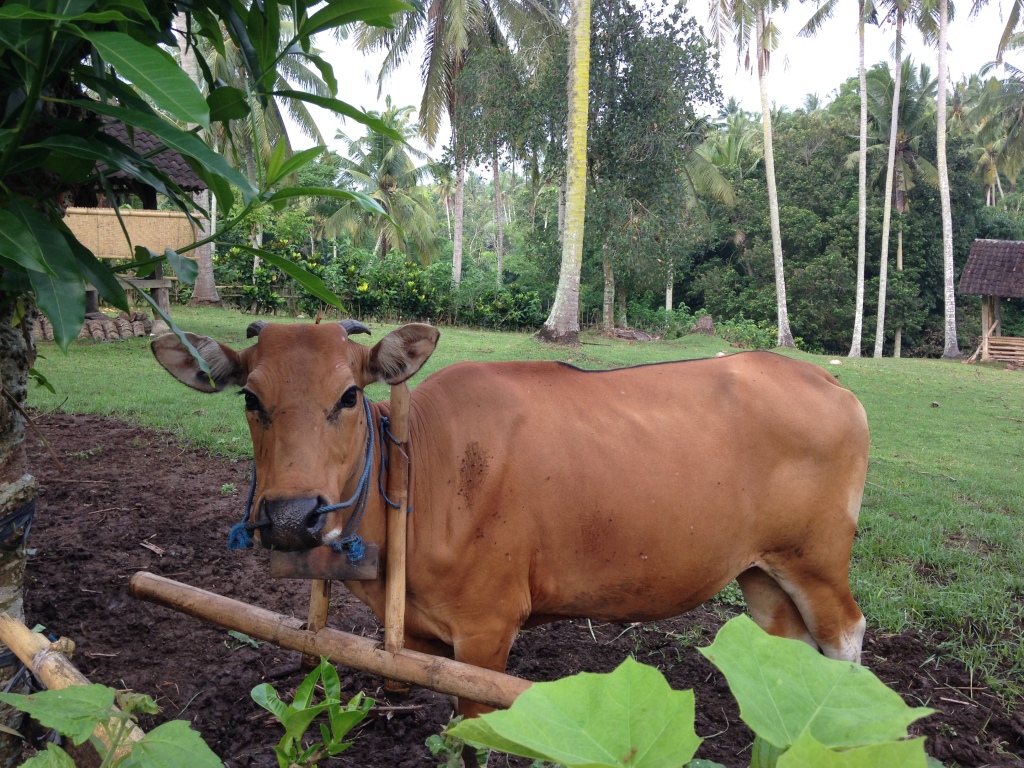 “You know, this would never happen in a million years in Chicago,” I said to Chris. “Can you imagine stopping people to ask them their name and where they live? And then smiling…at strangers?” Chris agreed that we’d met more people on the road to Antosari than we’d ever met in Chicago going anywhere.

Finally we made it to the top of a low hill, which in the suffocating heat felt like we’d summited a Himalayan mountain, and found a bale banjar, a village meetinghouse. Inside, a group of men sat at a long folding table playing cards and drinking what looked like arak, a liquor made from fermented rice and palm sugar. The space was dark except for a flat screen TV that flickered on the far wall.

I stayed outside, not sure if women were allowed in or what, while Chris negotiated for two bottles of their Pocari Sweat, a Japanese Gatorade-type drink. They agreed on 10,000 rupiahs and one of the men followed Chris out of the building. “Where are you going,” he asked. “Antosari,” said Chris. The man nodded and pointed east. “Four kilometers,” he said and went back inside the building.

“Four kilometers?!” I said. “That’s what they said four kilometers ago.” We were in no condition to wander off on a wild goose chase. So we turned around and headed back down the road to the villa. On our way we came across an old woman we’d met earlier. She eagerly greeted us and waved us over to her little lean-to home. Frail and shorter even than my four feet eleven inches, she tottered over to a makeshift wooden table beside what looked to be her bed. On it sat an enormous fruit, the size of a basketball. It was yellow with brown spiny skin and the flesh looked like unfurled flower petals. Tiny flies buzzed around the long-exposed innards. The woman said something to us in Balinese and then pointed to the sticky fruit that smelled of rotten pineapple. We asked her what it was; she told us; we didn’t understand. “Try?” she said in English. Then she took a handmade knife with an ornately carved handle and wiped it with a dirty rag. 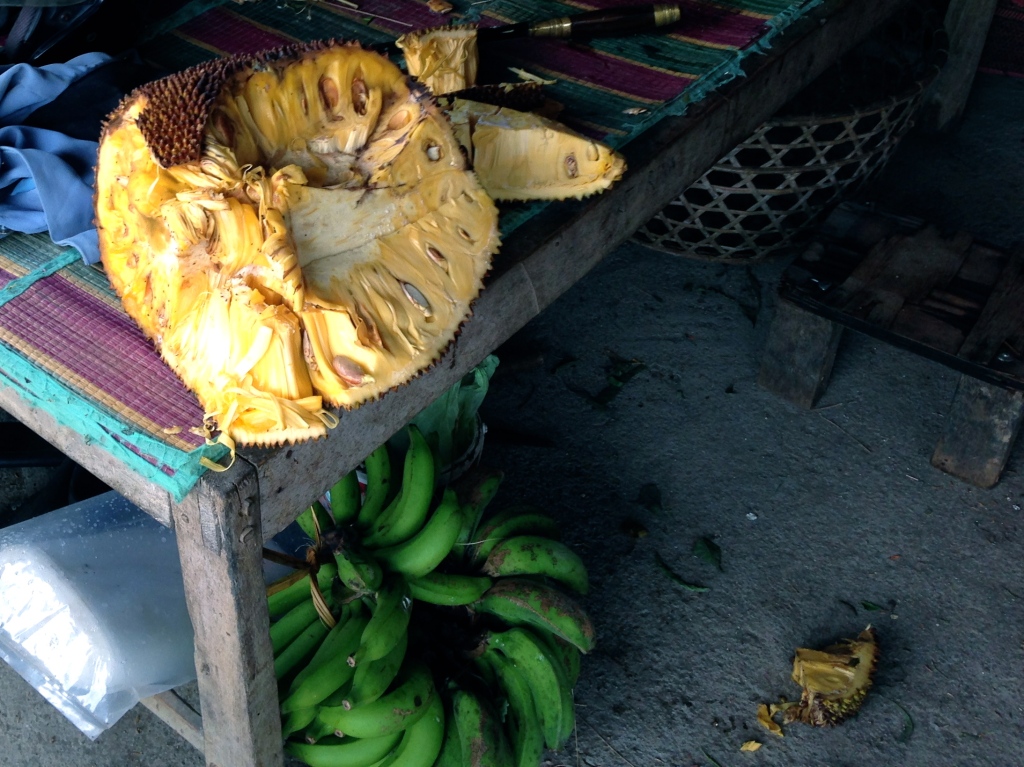 “Oh God,” I said under my breath, still smiling as broadly as I could. “We’re going to die if we have to eat that.”

“Shhh,” said Chris, still smiling big too. “Can we take picture?” he asked the woman. She nodded then quickly disappeared into another hut, obviously not wanting to be part of the portrait.

“What are we going to do if we have to eat that?” I said. We’d gotten all kinds of shots before we left Chicago, and we were loaded up to our eyeballs with antibiotics and other pharmaceuticals, but still, I didn’t want to spend my first day in Bali worshipping a porcelain god.

“We’ll just tell her that we’ll take it to go,” Chris said.

The woman reappeared with a plastic bag in her hand, and we let out a simultaneous sigh. She cut off a huge piece of the fruit and placed it in the bag and tied the handles. Then she told us all about how to prepare it, or store it, or something, and handed us the bag. Terima kasih, we said with a small bow. And I really meant it. Not only was her gesture exceedingly generous, but I was selfishly grateful for another day of good health. The woman walked us back to the road, prattling on in Balinese. We nodded and smiled, and she laughed and laughed and waved us good-bye.

As we strolled home I thought about the wedding tomorrow. Would the bride be as mirthful as this woman in another sixty years?

After two decades of copyediting for scholarly publishers, I decided to put down my red pen and pick up a black one. Right now I'm working on a memoir about the time I lived in a yurt in the off-the-grid wilderness of Montana, just outside Glacier National Park. When I'm not in Montana, I'm on Dewees Island, SC, or wandering around the planet with my husband, always wondering what to make of this amazing gift of life. View all posts by Monica Graff