Cambodia #2: Ant Pee and the Silver Lining of Agrarian Communism

Despite our early start, we didn’t beat the heat. Cambodia was in the chokehold of a record-setting heat wave, and outsmarting it was laughable. As blasts of thick air and sand exfoliated my face in the back of the tuk-tuk, I thought of all the ways one might describe such a nauseating temperature—blast furnace, chicken roaster, Dante’s Inferno, Death Valley with a monsoon season, or maybe the innards of a Brobdingnagian steam machine.

As I pondered how long it could possibly take to find some kind of village near Beng Mealea, a pig whizzed by on the back of a man’s motorbike. Crusted in dried mud from hooves to spine, the animal was tightly trussed, upside down, alive.

Things could be worse, I reminded myself. 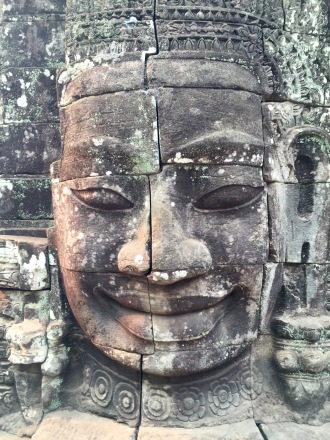 Nita made polite conversation to help pass the time. “Have you tried fried spiders yet?” she asked, tucking her wind-tangled hair behind her ears. Despite the ninety-eight degrees, she was dressed snugly in a long-sleeved flannel shirt, long pants, and socks.

“Of course!” She laughed and shook her head, as if she were thinking kids say the darnedest things.

“Like crickets!” she said. Chris, Mike, and I exchanged saucer-eyed looks and tried not to laugh.

“Of course,” Mike said in his usual dead-pan way. His body heaved but his laughter didn’t escape.

We shook our heads.

“How about ant eggs?”

We shook our heads again.

“Oh they are so good! I ate them as a little girl when my friends and I played outside. You take kapok fruit, peel it, chop it, put salt on, then put it inside an ants’ nest and let the ants pee on it.”

“Pee?” I asked. Nita giggled and nodded with gusto.

“And what does that snack taste like?” I asked.

She squinted her eyes and thought for a second. “It taste sour, salty, kind of chewy. It just taste good, really! But my favorite is salty crab. In my orphanage we caught the crabs, put them in a jar with saltwater, and then let them cook in the sun for one week.”

Under Pol Pot’s regime, which enforced a half-baked plan to institute “agrarian communism” by forcing the entire population to become farmers in labor camps, Cambodians learned a lot about what was edible and what was not.

Even villagers who grew their own food were forbidden to eat from their own gardens, Nita told us. That way they could be starved into working in the labor camps in exchange for food. This policy drove many people to acts of desperation.

Nita’s family and many others took to secretly digging up the roots in their vegetable gardens while leaving the tops of the plants in place to fool the soldiers. They boiled these roots and ate them, along with anything else they could find: spiders, ant eggs, frogs, dogs, and sometimes even dirt.

“In those times people would eat anything,” Nita said. “They weren’t afraid to try, because they knew they might die soon anyway. And that way they found new things to eat.”

Back in the tuk-tuk, we passed a woman fanning smoke at a roadside food stand. With all the talk about adventurous eating, I was a little more receptive than usual to taking a closer look.

“You want to try it?” Nita asked and tapped the driver to stop. 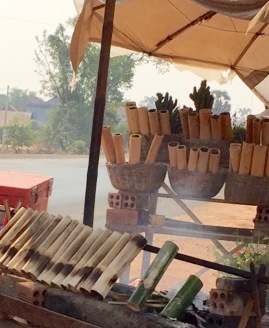 “Why not,” I said. If all the millions of people in this country could eat whatever was cooking in that smoke, so could I. We were far into the countryside now and few people passed us on the road. It didn’t seem like the most promising location for a food cart.

Nita placed our order and the woman handed us blackened bamboo stalks from the fire. I took mine and pulled the coconut fiber plug from the top.

“Why not?” I said. Inside the barbecued stalk was a concoction of tightly packed sticky rice and red beans in a coconut milk custard. A little gooey but not too sweet, it was one of the tastier treats I’d ever eaten. Lucky for me, I’d gotten off easy with this popular Khmer snack in which I could identify—without fear—every ingredient.

I devoured my krolan with relief, not realizing that within the hour I would have a very different idea about what it means to be lucky.