We had just emerged from a lazy lunch at a French noodle bar when a pair of breathless tourists stopped us on the street in Saigon. “I wouldn’t go that way if I were you,” said the Englishman in khaki shorts, safari jacket, and tall black socks. “Unless you have a death wish.” His red-cheeked wife nodded in agreement. “There’s a riot happening,” she said in a shout-whisper.

I wondered how the two spoke with such authority on the matter. The whole megalopolis (population 8.4 million and growing) is nothing but one big crowd sorted into smaller crowds. And there’s always a riot—of people, colors, smells, and sounds. Not even the traffic stops. If you want to cross the laneless stream of beeping motorbikes, you simply have to step into it and let it flow around you as you move across.

The more Safari Sam and his sidekick issued bug-eyed warnings, the more determined I was not to heed them. As the couple scampered away from the melee, I pushed and pardoned my way toward it until finally I spotted a human barricade of policemen. Behind them stand backup, men in army green military helmets and bullet-proof vests. Like a Louisiana levy, they dam a mounting wave of men and women holding signs.

Still, compared to my heightened expectations the scene is anticlimactic. I scan the crowd. Are these protestors violent? Are we in danger? While I assess the mood, every pedestrian moving in my direction jams up around me on all sides. I feel pointy elbows and backpacks and breath on my neck. My personal space is steadily sucked away.

“Get pictures,” I yell to Chris as he moves in for an even closer look.

I find a step and look out over the undulating sea of humanity, most in their twenties and thirties, waving placards with exclamation-pointed messages I can’t understand. Are they still celebrating Reunification Day twenty-four hours after the fact? Yesterday there were even more people downtown than this. But they weren’t clutching cardboard cutouts of fish skeletons.

The security barricade parts to let the protestors proceed, and a young man at the front chants a slogan in Vietnamese. The crowd joins him, and as the discordant voices fall into a rhythm that quickly mounts in speed and decibel, the air crackles with purpose and tension. It occurs to me that one ill-timed backfire from a motorbike could change the fate of every one of us standing in this intersection. We’re in a tinderbox, and it’s anyone’s guess if someone holds a match.

But so far both the protestors and the officials seem peaceful. Well-behaved. And unarmed. Then thirty feet in front of me one of the hard-hatted security guys shoves a girl right between the shoulder blades. Apparently she’s overstepped some invisible line. Is this the match?

“Get a shot with the signs so we can translate their messages!” I call out to Chris. He nods, holds his camera above the slow-moving wave of shiny black heads, and I motion to him to move out. It’s time to get out of here. Just in case.

A young woman next to me points and says, “That one says ‘Factory Waste Killing Fish.’” I thank her. She smiles. And all of a sudden an enormous feeling wells up in my chest. It’s pride. Not for me but for her, for what her fellow citizens are doing here today. This isn’t a riot. It’s a good old-fashioned protest. And it’s the last thing I thought I’d see while visiting a communist country. 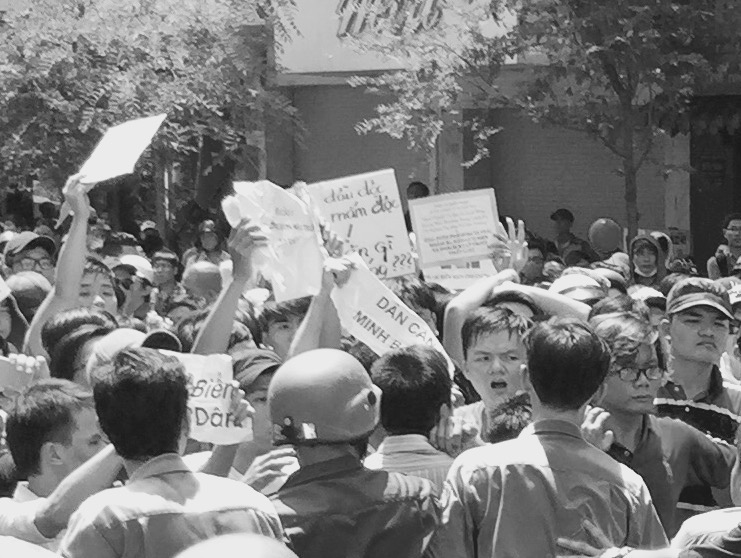