Morocco #3: The Danger of the Desert

As we sped along the dusty two-lane road, there wasn’t another car in sight. Agafay wasn’t our first choice. We’d never even heard of it. Nor had we ever considered that there are many different types of desert. To me, you have your Arizona desert, with those arms-up cacti, and then there’s the sand dune kind of desert, like in Lawrence of Arabia. That’s the one we wanted to see, the Sahara. Instead, we had visited its edge, the pre-Saharan stony desert of Agafay, because in the summertime the temperatures in the interior are too caustic for most Western tourists to bear and things can go wrong.

“In the Sahara it is all sand. Not rocks, like here,” said our guide, Boujeema. Chris and I were in the backseat of the cool, cardamom-scented SUV, the one I’d pined for while ambling across an endless roasting pan on the back of a moody camel. I know it’s cliché to say it was as hot as an oven. But I’ve opened a lot of oven doors in my lifetime, and that’s exactly how it felt—as if the skin on my face might sizzle up like a deep-fried pork rind. One can only imagine what the heat of the true Sahara, four hours south, would be like. The very surface of the sun?

Looking at us in the rearview mirror as we left Agafay and headed north toward the High Atlas Mountains, Boujeema described the desert we’d missed. “The Sahara is like an ocean. The sand is always moving, because of the wind, you see. In just a few hours, a car can be buried.”

“Are there really storms with walls of sand that wipe out telecommunications and stuff?” I asked.

“Oh, yes, that is true,” said Boujeema. “But even when there is not a storm, and even if you believe that you are prepared, the desert is a dangerous place, especially in the summer months. Going now is not recommended.” He looked at me the way a teacher does his pupil, and I nodded that I understood, forgetting for a moment that he was a decade younger than I.

During the past three days we’d spent with Boujeema, a small man who wore owlish glasses, plaid button-down shirts, and Western jeans, I’d come to learn that he was the authority on what was and was not recommended. I got the feeling that his source was typically the Qur’an, but it wasn’t always clear. Either way, Boujeema’s advice on matters was usually sensible. Although I was glad I hadn’t found myself in a position to need some of it. Such as what to do when you run out of water in the desert.

“Then you can drink camel pee pee,” Boujeema said.

“Camel pee pee. Yes. You can drink it!” he said with a glint in his eye. “It is considered medicinal. Very good for you.”

“Yes, yes. It is recommended. You can even find it for sale in the market. The camel’s milk, too, of course.”

Outside, the barren land unfurled around us like an apricot-colored quilt, dotted with the occasional cluster of mudpack homes that blended into the earth. We passed an old woman riding sidesaddle on a donkey not much larger than herself. The beast appeared to know its route, a good thing since its passenger, slumped in on herself, looked asleep. She didn’t even hold a goad or a set of reins.

It was still Ramadan, so maybe she was daydreaming about the upcoming iftar, the feast she would prepare and share with her family after sundown and the evening call to prayer. The day’s fast would be broken with something simple to digest, like a bowl of tomato soup followed by a hard-boiled egg. Next would come a mesmerizing dance of sweet, savory, and exotic flavors. Stuffed dates, pan-fried lamb, breads, cheeses, olives, and jam; almond cookies, honey-glazed pastries, watermelon juice, and mint tea. Always plenty of hot, sugary mint tea, poured high from a silver pot, so that bubbles would spume at the top of the small juice glasses (never cups), as the amber liquid bloomed in a back-and-forth ritual, pot to glass to pot and back, before being served.

Boujeema explained that these traditional feasts would culminate in one joyous celebration (Eid Al-Fitr) at the end of Ramadan. No lunar calendars or telescopes could be used to determine when the holy month would end. Only the local imam could announce Eid after spotting the moon with his own eyes. And no one could know exactly which day that would be. But since Ramadan could last for no more than thirty days, it would for sure occur before we left the country. Which meant Boujeema would not be with his two young children and wife on this holiest of days on the Islamic calendar. He would be with us. It would be like working on Christmas Day.

When I asked Boujeema how he felt about this situation, he smiled into the rearview mirror and said, “It is my honor to show you my country. My family will wait for me, and we will celebrate together when I am home again.”

“Well, at least we’re not going to the Sahara, so there’s a good chance you’ll make it back,” I said and laughed. Boujeema smiled politely. Chris had fallen asleep, and I stared out the window at a small village blurring by.

“Earlier, when you said the desert can be dangerous, were you talking about an experience you’ve had yourself?” I asked.

Boujeema watched the road in silence. His mind seemed to be somewhere else. Then he said, “Yes, but that happened a while ago.” When he looked into the rearview mirror, his eyes met mine briefly before focusing behind me. His face turned hard and he mumbled something in Arabic. The car veered toward the shoulder of the road then slowly came to a stop. 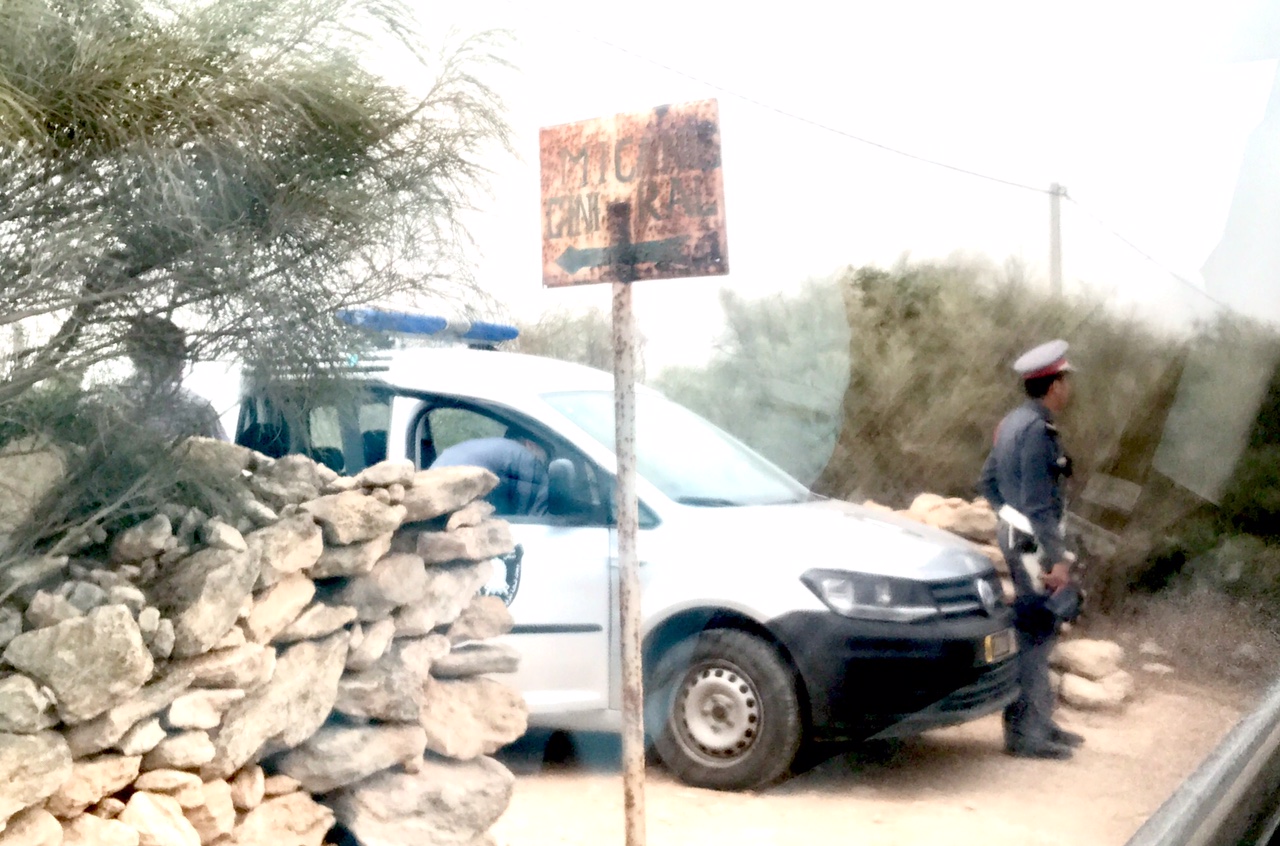