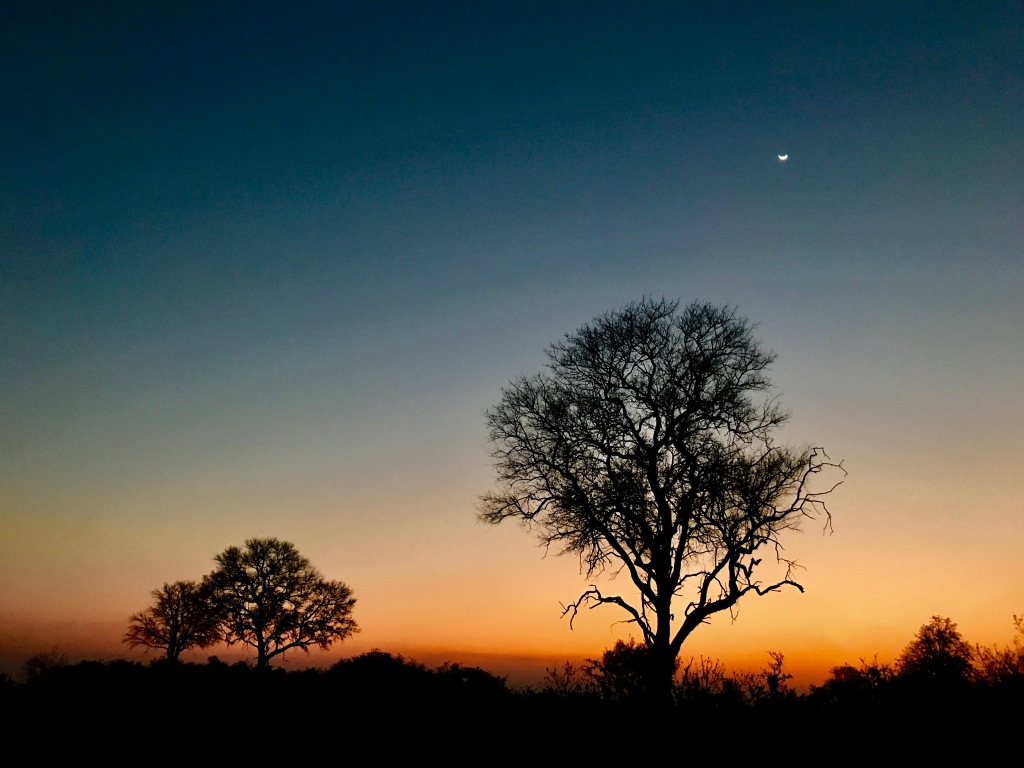 After TJ returned us to our tent we turned in for the night. As I sat scribbling notes by the light of a lantern, Chris cleared clothes and toiletries and cans of bug spray from his bed. The day’s heat had broken, but inside the tent the air was stagnant and warm and filled with the smoke of a citronella coil. I was deep in thought when gradually my conscience became aware of something moving outside.

“What?” Chris said, untucking the twin bed’s sheet and blanket so they wouldn’t trap his tall frame.

Twigs snapped in the distance. Bushes rustled. “That!”

“I don’t hear anything.”

“Are you kidding me?” I snapped shut my journal and sat on the edge of my bed. “There’s something out there moving around in the bushes. Listen!”

Chris quit messing with the bedding, stood up straight, and cocked his head. “I don’t hear anything. Are you sure?”

We’d heard from the camp staff that the hippos in the lagoon, the lagoon that is not more than 100 feet from our tent, come onshore at night when the sun can’t harm their photosensitive skin. Sure, these mammoth beasts look cute in the water, what with their pink mini-musketeer ears, but these animals are fierce. They fight to the death. And their loud, deep, huffing grunts from their big fat heads halfway submerged under water are very disturbing—especially in the dark of night when you’re in the middle of the Okavango Delta, far, far away from a medical doctor and even farther from a proper hospital, in a flimsy tent, with no weapon, and your husband thinks you’re imagining things.

The freaks come out at night

I looked at Chris with The Look. “Obviously it’s bigger than a grasshopper. What grasshopper breaks limbs underfoot, for God’s sakes?”

This went on for several minutes, me scared for my one and only life, Chris unwilling to admit that anything could be seriously amiss. Then came a flash of light from someone’s flashlight.

“Someone’s looking for it. I told you!” I said, standing up. The circle of light moved back and forth across the camp, then down the main pathway, then it turned back toward our tent and came straight toward us. “They know something’s here!” I said. We turned off our lanterns, moved to the green-mesh windows, and peered into the dark. “I don’t see anything,” Chris said. “Whatever it is, I think it’s gone now.” Apparently the flashlight owner, probably the night guard, agreed. He left.

I looked at Mike and Susan’s tent about fifty yards away. No movement. All was silent except for the song of crickets. Even the baboons had gone to bed. There was nothing left to do but try to get some sleep before the guard roused us for the morning drive, which was now only six hours away, so we fumbled back to our beds and tucked in for the night.

What the killer beasts saw earlier that day

No sooner had we started to doze than we were slapped awake by the sound of something crashing through the woods. Branches snapped … and not little ones either. These were the substantial arms of trees, large trees. I could tell from the sound of the ruptures. I leapt from my bed into Chris’s and grabbed one of his steely legs for dear life. Instinctively, he pushed me off, grabbed the manual flashlight on the nightstand, and stood furiously winding the thing until the light came on. Then he shone it out the window on my side of the tent.

I couldn’t see a thing, but I was convinced the invader was a hippo determined to eat us for dinner. I mean, really, it’s only a matter of time before such a calamity strikes a camp situated so close to a lagoon filled with man-eating animals, the same camp that made us sign a piece of paper saying it bears no responsibility if we are hurt, maimed, or killed! Had Capstick come across killer hippos? I have to think so. And those mouths, my God, they’re so enormous they could take off your head with one bite! Just think of all those big teeth ripping through your skin, right down to your jugu—

Finally, my eyes could make out the outline of a lumbering, dinosaurish beast pulling tree branches down with its snakelike trunk. It was so close I could hear it breathing. Snorting really. An elephant! What would we do if it decided to walk right over—or into—our tent? You might think an elephant doesn’t sound as dangerous as a hippo, but when is the last time you were close enough to reach out and touch one while it was eating? Sure, they’re cute with their big Dumbo ears and all, but these things are the largest living terrestrial animals on the planet! And strong! Look what that one did to the poor guy in Orwell’s “Shooting an Elephant” . . .  gave him a permanent face-plant into the mud after stepping on his back! I folded my arms across my chest. Suddenly I felt cold. I was covered in goose-bumps.

“What are we going to do if they barge in here? How are we supposed to protect ourselves from living bulldozers?” I said. Chris put his arm around me as he fanned the dimming flashlight back and forth. “This is amazing, isn’t it?” he whispered and pulled me close. “Look, there’s a whole family, even a baby. They’re just eating the trees. I don’t think they’re going to kill us.”

I wasn’t convinced, but as we stood arm in arm, watching the slow destruction of the campground’s flora, the monsters of the night transformed into something unexpected: peaceful pachyderms. My mind went back to the maggot-infested elephant I’d been talking about at dinner. Likely it had been part of a family like this one. Maybe this was its family. Once it had been majestic and powerful, knocking down trees and trumpeting to the world. Now its body lay in a meadow dispersing back into the universe, meeting the destiny we all share.

View from shower next morning

I suppose that sounds like a downer, but you’d be surprised. This little near-death experience has added a certain charge to the air … like every moment counts and every detail too. When any random moment could be your last, you can’t help but suck in the beauty of every little thing … the iridescent wing of a damsel fly, the grass swaying in the breeze, and a mama ellie and its baby … OK, OK, I’ll stop. But you should try it sometime. Just think to yourself, This is my last minute on earth, and then see how brilliant everything looks.