Once an eleventh-century village, or borgo, the origins of Castel Monastero Retreat & Spa have been lost in time, but in the annals of local history the castle was first mentioned in 1044 under the name Sarna. Soon thereafter it was mentioned in relation to Berardenga Abbey, then as a military outpost against the city of Siena, and at some point as the country house of the well-to-do Sienese Chigi Saracini family, whose palace in Rome is now the seat of Italian government. Fascinating stuff for sure, and we savored every moment of the hotel’s superb service, the goose-bump views of the Ombrone Valley, and the treasured wines of the estate’s surrounding vineyards.

We even enjoyed a full day of hydrotherapy at the spa, which included floating in mineral and magnesium salts (a truly transporting sensation), lounging in a three-pool Jacuzzi with perfectly positioned hydromassage jets and waterfalls, and sweating it out in the Turkish baths, steam rooms, and rainbow-lit misting stalls. Luckily, we chose the perfect day to stay indoors. As I reclined for a divinely painful deep (deep!) tissue massage, surrounded by votive candles and the scent of Etruscan herbal oils, the sky abruptly turned dark and erupted in lightning, thunder, and hail. It was easy to let my mind drift back in time to imagine this one-time fort under siege. After five hours of hard-core (to us) spa-ing, Chris and I took advantage of a break in the storm and sprinted back to the room for a glass of wine and a siesta.

Feeling fully rejuvenated by all the therapies, we ate dinner at the hotel’s restaurant, La Cantina. Besides the East-West–inspired spa and treatments of Dr. Mosaraf Ali, which the hotel does go on and on about in its literature, the next crown jewel of Castel Monastero is its restaurant, somehow a product of Gordon Ramsay.

It’s not clear to us how or why an Englishman would be invited to create the culinary delights of Tuscany, but we are sure that this superstar chef’s talents are overrated, at least judging from our three meals. A limited menu featured pork, pork, and more pork (which Chris can’t eat due to gout), and never proffered a single special to mix things up. When staying in a remote resort for six days, it’s likely one might soon tire of the same ten dishes, especially if the only main course menu item he can eat is cod, cod, and more cod. That said, with the dining area housed inside the building’s original cellars, aglow with a bevy candles, the atmosphere was romantic. And we spent hours partaking of all the courses—antipasti, primi, secondi, contorni, and dulce—washed down with plenty of Chianti Classico and postprandials such as campari and grappa. Yes, reader, I am now on a diet.

For nearly a week we toured the Tuscan countryside in a doll-sized Fiat (the little marshmallow) and discovered charming hill towns and villages, some of which, like Castel Monastero, have also been converted into luxury accommodations. Gargonza was one such enchanting place. We came upon it after deciding to dispense with our Italian navigation system, which couldn’t seem to tell the difference between a dirt road and paved one. We were sick of being told such things as “turn left on Via Dell’Oriuolo, followed by “Recalculating … .”

Chris and the Marshmallow

If you think it’s hard to pronounce Via Dell’Oriuolo as a native English-speaker, try interpreting a robot’s pronunciation of it whilst attempting to find its written counterpart on a roundabout street sign, which of course is nearly impossible because street signs are optional in Italy, all the while watching a string of locals behind you lay on the horn and flip you off. Then imagine a emphatic navigator (that would be me) in the passenger’s seat pointing at an old-fashioned paper map and insisting that you’ve gone the wrong way—again. Ahh, la dolce vita.

Anyway, once we ditched the artificial intelligence, we aimlessly wandered hilly roads and hairpin switchbacks, stumbling upon Etruscan ruins, tiny towns with old-as-dirt churches, hidden hiking paths, and a bevy of gattis in every shape, size, and color. 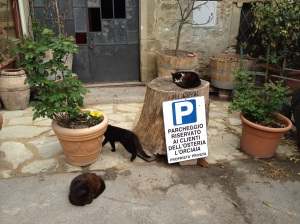 Once we were filled to the brim with our freedom and solo maverick adventures, we accepted the Castel’s gift of a personal guide for the day in order to explore Siena while learning about its culture and history. I’d been there thirteen years ago with a friend from college, but we had been so exhausted from a three-country tour that we spent most of our time dozing in the campo. I’m pretty sure we didn’t learn a thing while there, other than how to sleep in the sun with pigeons.

If you haven’t been to Siena, it’s definitely worth a visit. Founded in Etruscan times (that’s 900–400 BC, give or take) by a tribe called the Saina, this small city on a hill was completely walled in by the thirteenth century to keep out invaders. The walls still stand, and traffic is severely limited within them.

As a result, many narrow side streets still feel medieval and are fun to explore. Our guide, Suzanne, interpreted the town’s highlights, including the postcard showpiece Duomo di Siena; the underground aqueduct (bottini); and the most beautiful piazza of all Italy, the Campo, home of the annual Il Palio,a tiny yet treacherous horse race that would thrill Ernest Hemingway and his ilk.

We also toured the thirteenth-century Basilica of San Domenico, which made an indelible impression on me—not because it’s considered one of the most important churches of Italy, but because it houses the relics of Saint Catherine. I’m new to the concept of human religious relics, and standing in that enormous structure shaped like an Egyptian cross, I just couldn’t get over the fact that I was staring first at someone’s 632-year-old thumb in a glass case, and then at her very own noggin in an ornate reliquary! Poor Saint Catherine. She was a head of her time, indeed.

After two decades of copyediting for scholarly publishers, I decided to put down my red pen and pick up a black one. Right now I'm working on a memoir about the time I lived in a yurt in the off-the-grid wilderness of Montana, just outside Glacier National Park. When I'm not in Montana, I'm on Dewees Island, SC, or wandering around the planet with my husband, always wondering what to make of this amazing gift of life. View all posts by Monica Graff