New Zealand has no man-eating predators. No lions or bears to scan for as you tramp through the wilderness. No need to examine the freshness of scat piles for your own safety. Hiking here is more relaxed than in our home state, where trekkers have to call out “Hey, bear!” every couple hundred feet, one hand always at the ready on a can of bear spray.

On this island it’s the little predators that are the problem. The wily ones, like the rats and the stoats. They kill countless birds every year, making such an impact that the government of New Zealand has had to resort to a campaign they call Battle for Our Birds, which involves extensive airdrops of 1080 poison. With a record-size mast from the beech trees that brought rats in droves this year, the Department of Conservation plans to carpet bomb 600,000 hectares of conservation land with poisoned pellets.

Not surprisingly, the strategy has generated some controversy. Not everyone thinks baiting pests with sodium fluoroacetate is the answer to rebalancing an ecosystem originally absent of mammalian predators. I wondered about it myself after seeing signs and T-shirts that said “1080 Kills Everything.” How does 1080, a lethal poison with no known antidote, affect the animals and insects that eat the targeted animals? How does it not hurt unintended victims? How does it affect the water supply? For a country known as clean and green, spectacular airdrops of a poison that even the U.S. has banned due to its “extreme hazard to human health and to the environment” seems out of character.

But the DoC says it’s working. The rat population is down, as is the stoat’s. And the birds are beginning to recover. Plus, there are success stories like Adele Island, now a wildlife sanctuary. Here no human traffic is allowed, and every single predator has been eradicated (except for one rat and thirteen mice who either swam over or hitched a ride on a boat. They were trapped and killed in March).

Adele was the first stop on our daylong charter on a catamaran cabin cruiser. The captain, Emma (pronounced Eeema), brought us to the edge of the island, which some say is shaped like the curvy wife it was named for, and cut the engine. With the motor silent, the air flooded with a cacophony of birdsong. The bellbirds (korimako), little guys with a big trill, dominated the choir. 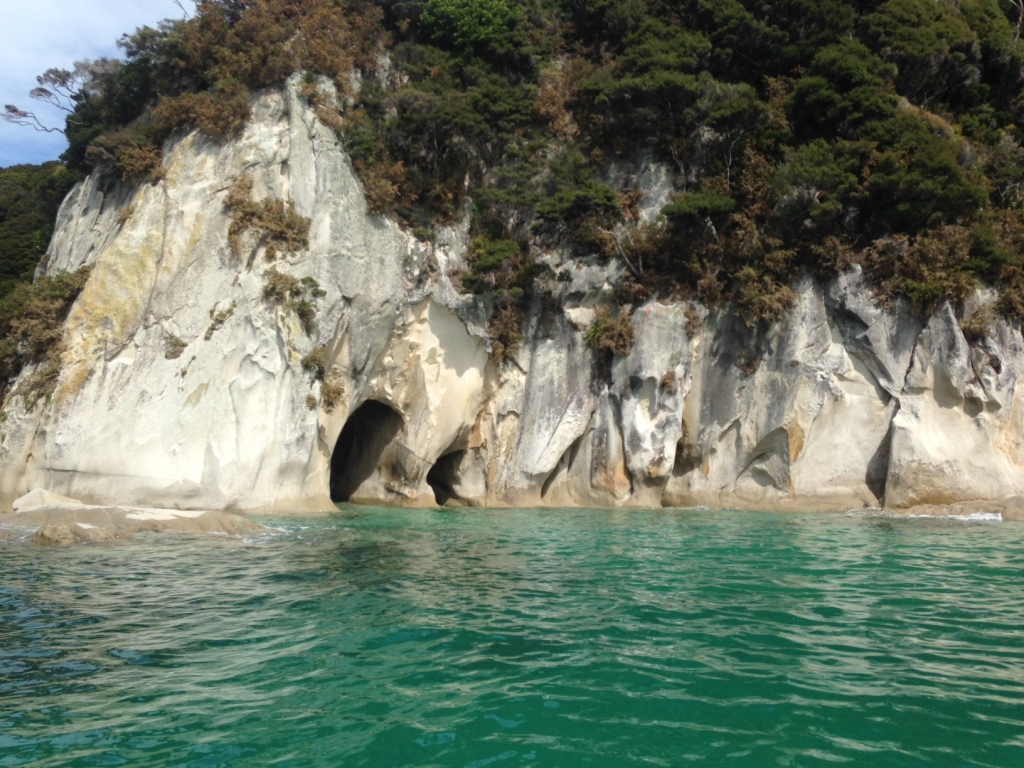 Emma came out on deck, closed her eyes, and lifted her chin. “Isn’t it beautiful?” she said. Young and enthusiastic, Emma had spent several years working to restore the bird population on the island and this was no doubt a triumphant sound for her. When I asked Emma what she thought about 1080, she agreed it wasn’t an ideal solution. “But these birds are at serious risk,” she said. “We have to do something.”

After an onboard lunch of smoked mussels, fresh fruits, cheeses, and veggies, we headed toward a smaller island. Emma dropped anchor then set me and Chris on our way in a sea kayak. “I’ll let you in on a little secret,” she said and handed a paddle to me from the stern.

“If you paddle out past that beach there, you’ll find some seal pups. Give it a go!”

I’d only been on a sea kayak one other time, and that was at near low tide in a harbor with tall grass — and I could see the bottom. This time we were really out to sea.

Of course there wasn’t really a “shore,” only a flat shiny face of rock jutting from the water. I double-checked my life jacket and started paddling quickly toward land. Just around the bend of the small beach, as promised, were a family of fur seals (rare New Zealand sea lions, Emma informed us). Just three weeks old, the pups took their swimming lessons in “nurseries,” small pools enclosed by rocks. Chris and I paddled close enough to get a good view but far enough away not to stress them.

I clicked away with my iPhone, but it was impossible to capture what I felt with my eyes. For one thing, I was a bobbing cork on a vast sea, so focus was out of the question. And then there was the risk of dropping my entire life overboard and watching it sink away to Atlantis. I sealed the phone in a baggie and tucked it into my pocket.

As we sat in silence, the kayak moved aimlessly with the swells. Then, as if a director had yelled “Action!” one of the larger lions came up to the side of our kayak and rolled around. I caught a glimpse of his whiskers and big black eyes, sure that I’d seen a mischievous look. He dove under the boat and popped up on the other side, then rolled around again, just like our cat Bosworth when he wants a belly rub. I missed a great photo, but I’ll never forget that moment of connection with an animal who lives in a world alien to me.

On the way back to Split Apple, Emma filled our glasses with wine and regaled us with tales about her life on the high seas. I felt like I was there with her when she told us about her first voyage — from Chilean Patagonia to New Zealand on a thirty-foot sailboat, with one man who had never sailed and a captain who had never captained.

But as soon as our retreat came into view, I was distracted by a different story. With all the talk about poison and high-seas adventure, I decided that when I got back to our room I would do the thing I had so far resisted. …