Wikipedia still lists the cause as “unknown” for its entry on the “2016 Vietnam Marine Life Disaster.” But many knew the cause—including the Vietnamese government—weeks before villagers in the central region were told not to eat the estimated 115 tons of fish that had been mysteriously washing ashore since early April. Fishermen still fished. And restaurants and markets still sold the sea’s sickened bounty.

While disembarking a plane from Saigon to Danang, a Vietnamese businessman warned us about the situation. We’d sat next to him on the flight and told him about our plans to visit Hoi An, then Hanoi, Sapa, and finally Ha Long Bay. He’d nodded in approval of each destination and even suggested his own not-to-miss highlights. It wasn’t until we were on the jetway that he came upon us and spoke in a lowered voice.

“Do not eat the fish,” he said then waved his finger and shook his head.

“Formosa?” I asked the man. By this time I’d learned from an online edition of the Saigoneer that the protestors we’d seen in Saigon were speaking out against Formosa Ha Tinh Steel, the Taiwanese company accused of leaking toxic chemicals into the South China Sea. (It’s also an offshoot of Formosa Plastics Corp., which has been fined in the U.S. for violating wastewater discharge limits in Texas and Louisiana.)

So far the claims were conjecture, and the Vietnamese government continued to defend the company, saying the unprecedented fish kill-off could have been caused by red tide or some other naturally occurring marine event.

The man hiked his yellow backpack onto his shoulder and looked around. “Yes, Formosa. Don’t trust the government. I don’t trust. They say black; it’s white. Then they say it’s white, not black. They flip-flop. You can’t trust them. That’s why I don’t have dual citizenship. Only U.S.”

I wanted to ask him why he’d moved to America and what he was doing in his home country now, but without another word he peeled off toward baggage claim. Which is where we found a man holding a sign with our surname written in bold block letters. It was our guide, Quoc, and he would take us to Hoi An for a “very special, traditional Vietnamese lunch.” 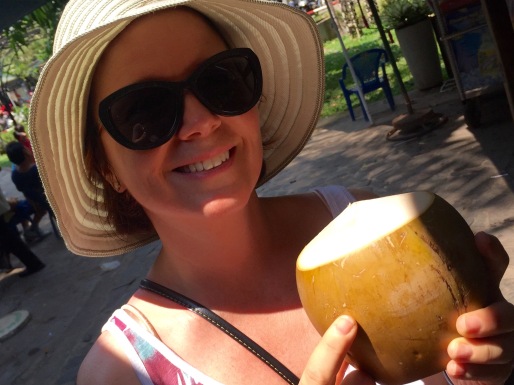