It’s hard to feel connected to a country when touring by train. You’re separated from most of it by glass and speed. And when you finally disembark—from the Maharajas’ Express, at least—you’re greeted with enough fanfare to make the Queen of England blush.

The staff lines up on both sides of a long red carpet for a hands-together, head-down namaskar greeting. Drums bang, horns blast, and dancers swirl in a frenzy, some in bejeweled dresses, others in ornate animal costumes. Once you emerge from the circus, you’re bedecked with yet another bindi on the forehead (sometimes two for extra good luck), a mala (hindu prayer beads), and perhaps a hand-painted scarf or a necklace made of marigolds. Then you’re sprinkled with rose petals.

The first time it’s fun, even flattering. All this for little ol’ me? But then the next six times it starts to feel ridiculous. And you notice that the natives are watching you more than you’re watching them—a situation that didn’t jibe well with the promise I’d made to myself. I was supposed to be looking for the everyday India, outside all the pomp and circumstance and ticketed entries. That’s a tall order when you’re taxied to all the popular tourist destinations via air-conditioned bus and then escorted to the gates by professional guides.

Plus, it’s hard to fly under the radar when weighed down with all sorts of baubles and an audioguide set. To make matters worse, I was tricked out in what I thought would be blend-into-the-crowd India wear. On the advice of guidebooks, I’d bought some salwar kameezes before leaving the States. These outfits, which are much louder than they look online, feature a top that looks like a dress; loose-fitting trousers with a crotch that grazes the knees; and a long scarf, called a dupatta (which I later found out I was wearing all wrong). The point was to be modest and to dissuade stares. But mostly I just wanted to fit in.

As if. The guidebooks forgot to mention that a Westerner wearing traditional Indian clothes gets everyone’s attention—locals and tourists alike. Many of my fellow female passengers remarked on my “bravery” and “sense of adventure.” And one husband practically gushed over the fact that my purple toenail polish matched my outfit. I had the distinct feeling I was the butt of a few jokes, which only heightened my paranoia every time a gaggle of schoolgirls asked to take a picture with me. This is common, our guide reassured me. They just want to show their friends they’ve met a Westerner, he said. But I think it proved that I was blending the way oil does with water.

Nevertheless, I had a mission. But how could I experience everyday India between the Hindu temples we’d come to see and the tour bus that waited curbside? I took the one option available: I talked to a villager. Only he was a tout. And we’d been told not to even make eye-contact with these persistent salesmen.

Up until now I’d obeyed, mostly because I didn’t want to endure the suction-cup scenario Chris and I had been warned about in the States. But this tout happened to be a beautiful eight-year-old boy. I couldn’t help but admire his big brown eyes laced with thick black lashes, and his tiny rosebud mouth, which still looked like that of a newborn babe’s … that is, until it exploded like a shotgun the minute he had me in his crosshairs.

“Madame, madame,” he said and waved a bundle of keychains carved into the elephant head of Ganesh. I looked away. It was the only defense I had, trapped on our almost empty tour bus and separated from the herd. He kept waving the keychains and I kept staring at the back of the busdriver’s head, thirteen rows away. Then he reloaded. “Where you from?” he asked, again and again.

“The United States,” I finally muttered.

“Yes, that’s right.” Someone had taught him well. I wondered if he knew the leaders’ names of all the tourists’ countries. Then I realized I didn’t know the name of his. Note to self: Know more about the country you’re visiting before you arrive and talk to someone who lives there.

“Where in United States? What city?”

“Yes, that’s right. Very good.” My mind went blank. I couldn’t think of a famous Indian person other than Mindy Kaling, and she’s never even lived there. Note to self: Memorize the name of at least one famous person in your host country. “You’re a smart boy,” I said.

“How about other languages? Do you speak Spanish?”

We giggled for a while and met each other’s eyes. For a fleeting second I recognized the twinkle of my mischievous six-year-old nephew back home. Then it vanished and he reverted to script. “Please, ma’am,” he dangled the keychains. I shook my head. “Look at this face.” He widened his eyes with the well-rehearsed gaze of an innocent and pursed his perfect little mouth into a pout. I cringed. Cute as he was, he was still a huckster. Note to self: Quit being such a mark.

“Try someone else.” I snapped open my fan and blocked the window. I didn’t dare look until the bus started to move. Then I spotted him across the tout-infested lot, working yet another middle-aged woman on yet another big bus. He’d have to work fast now. The sun was getting low in the hot, hazy sky, infusing the atmosphere with an amber glaze. The setting reminded me of an old expression: We eat and then we are eaten. We all have to hustle in our own way. My little tout was just part of the cycle that fringed everyday India. 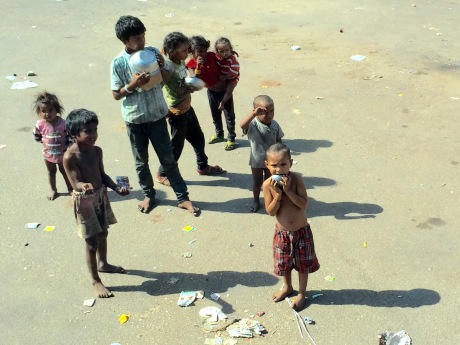