India #6: Loving the Ganges to Death

Floating down the Ganges one magical evening, I took a deep breath and filled my lungs with what I hoped would be fresh air. What started out as the exotic scent of sandalwood quickly morphed into a mélange of barbecued human, raw sewage, and garbage. I guess this is the kind of thing that might scare off tourists, but you’d never know it from the crowd of rowboats in the river.

As the dead bodies, coated in ghee and sprinkled with sandalwood, crackled inside the bonfires, resident cows, dogs, and goats browsed the ghats (steps leading down to the river) for leftovers. Every day in Varanasi—the oldest continuously inhabited city in the world—hundreds of corpses are cremated this way to free their spirits to the heavens. In the minds of many, Varanasi is the most sacred city on earth, and the Ganges is the mother who gives it life. So this is the best possible place to die. 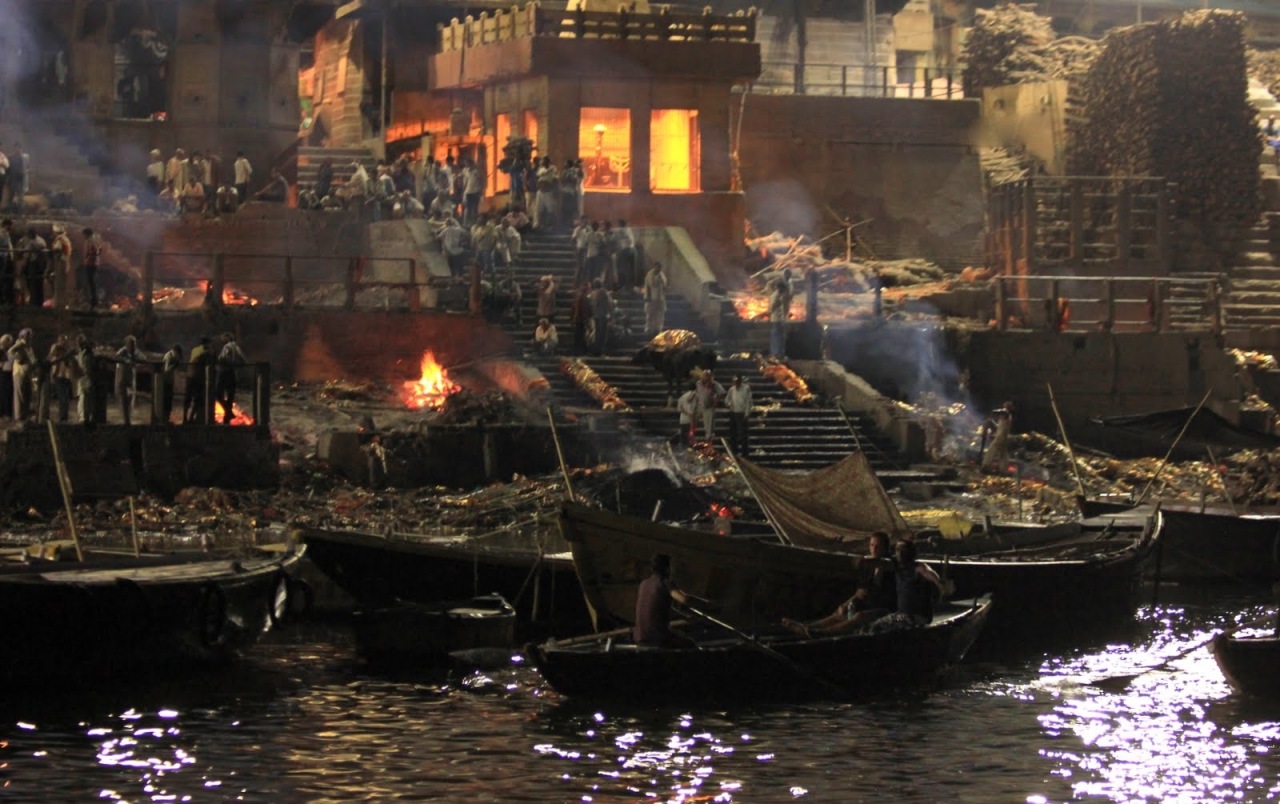 But what brought us here was the nightly aarti (a Hindu ceremony of light), which is not unlike a music festival with multiple stages. In addition to the funeral pyres and people-watching, there’s the ceremonial performances themselves, of which there were two that happened simultaneously. One group clearly had more resources than the other—more pandits (Hindu priests) in saffron-colored robes, bigger flaming lamps, louder crashing cymbals, and headier plumes of incense.

As the priests offered fire to the Lord Shiva, the audience prayed for blessings and gifted the Mother Ganga (the Ganges) with floating cups of lit candles and flowers. Far away, through the haze, a crescent moon dangled over the city, as it has for the past 9,000 years. I leaned back and closed my eyes, trying not to think about how we were all adding more trash and toxins to an already gravely ill river. I wanted to give myself over to the experience, to relax and let my body move in rhythm with the boat. The steady drum of chanting, ringing metal, and warm smoky air swept me away to another time. How long had people been coming here to have their sins washed away, to skip ahead in the cycle of reincarnation and shortcut their way to salvation?

I’d read that many Hindus believe the Ganga can break the perpetual cycle of samsara, of birth and rebirth, and thereby attain moksha, eternal liberation. The river is the elixir of life to them, bringing purity to the living and salvation to the dead. It sounds splendid. Who doesn’t appreciate an opportunity to sidestep suffering when possible? What didn’t make sense to me, though, was how the giver of such transcendent gifts could also be the receiver of endless trash, industrial waste, “night soil,” and the fetid corpses of those too poor to afford enough wood to burn them entirely, or at all, after their death.

To an outsider, it’s shocking, even repugnant, to see people bathing in fecal matter and the heavy metals left over from the hundreds of tanneries and other industries that flank the waterway. The sight reminded me of our own once-nasty river in Chicago, which for over a century was nothing but an industrialized sewage canal. At one point it was so full of garbage and byproduct that a person could walk across it. Not surprisingly, it caught fire … repeatedly. And the same is true for other rivers in the U.S., such as the Rouge River in Detroit. In 1985 the Rouge’s sludgy cocktail of oil, dung, condoms, and other unmentionables killed a twenty-three-year-old man who fell into it. He didn’t drown. He swallowed the water. Which gave him leptospirosis, a rare parasitic waterborne disease. 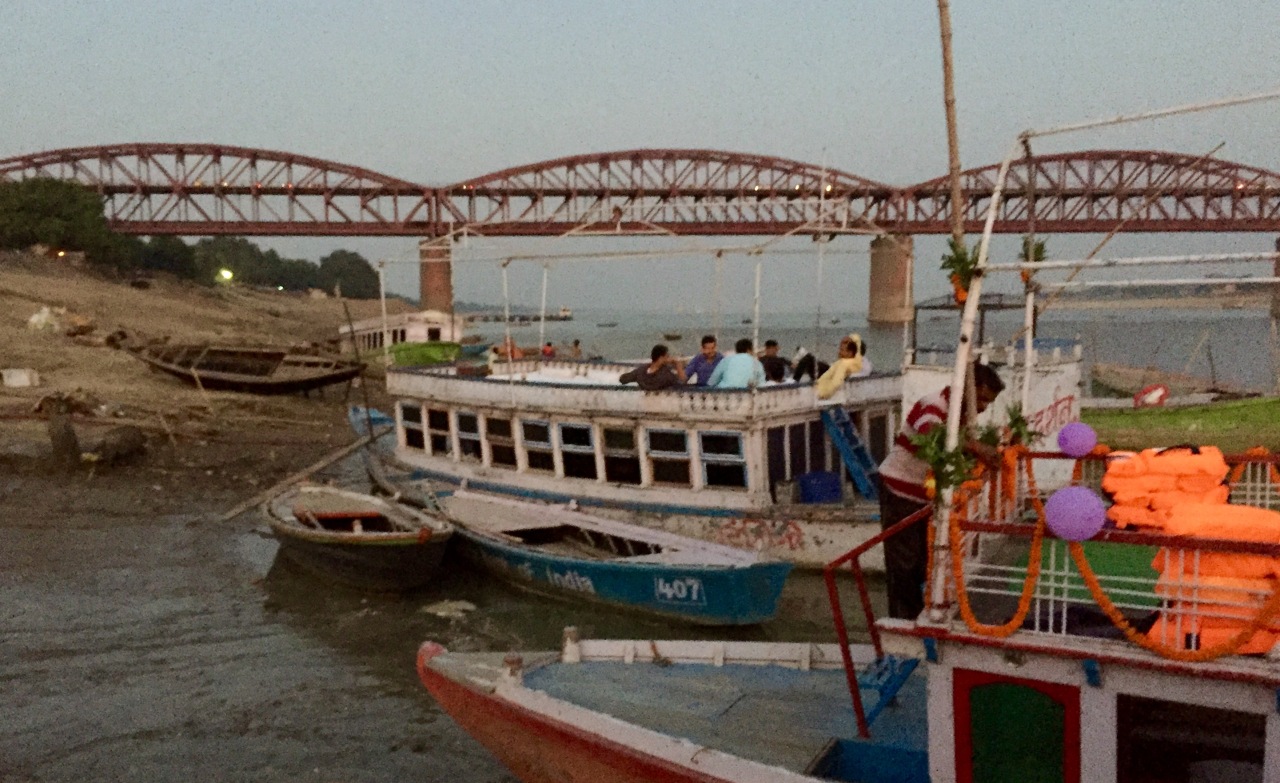 Trashed rivers all over the world, including other big ones like the Rhine and the Thames, have been revitalized. But it takes years of effort to make people realize—without overwhelming them—just how bad things are, and then to inspire them to think and act differently. So I can only imagine how much more complicated it would be to clean up this river, where ancient history, modern-day spirituality, and long-held superstitions are piled on top of politics, new science, and denial. Sonali Mittra, from the Delhi-based Observer Research Foundation, a nonprofit think tank involved in regional and transboundary resource management of water, put it this way: “The mythological idea of the Ganga is indeed more valued than the river itself.”

There are well-meaning devotees who insist that the Ganges is invulnerable to humans’ fallible ways. To them, the Ganga is a goddess. She’s almighty. She can take it. Okay, fine. But what about the suffering all this fluvial pollution has wrought: cancer, deadly diarrhea, skin rashes, drug-resistant malaria, endangered dolphins, and on and on and on? By the time the pristine glacier waters of the Himalayas reach Varanasi, they’re not only putrid, they’re deadly.

What will it take to restore the health and majesty of this Giving Tree river, I wondered as I placed my little cup of fire into the moonlit water with all the others. In Sanskrit, aarti means “complete love.” Maybe Mother Ganga is still waiting for that kind of devotion. The kind that doesn’t kill her. 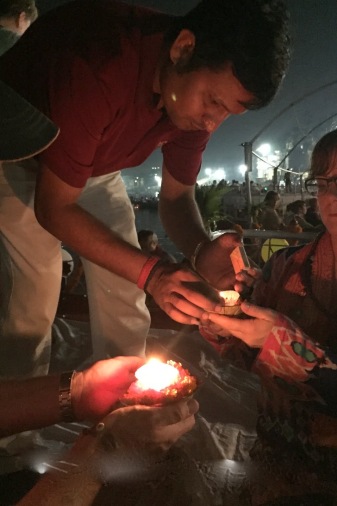