India #5: The Sheen of the Taj Mahal

“Good MORNING!” The greeting squawked through our cabin speaker with such garbled tenacity that I nearly poked my eye out putting on mascara. “Now we arrive into Agra, the jewel of Ind … shrrrr, eeeeeee, shrrrrr … ounge car at oh seven hundred to …. shrrrrrrrr … Taj Mahal.”

I took my fingers out of my ears and fished around for a Kleenex to clean up my forehead. “What in the heck was that?” I asked Chris.

“It’s time to go,” he said. “Do you have your sunscreen? Hat?” He stuffed everything into a daypack and pulled the drawstring taut. Then we trot-walked through six cars to queue up in the Safari Lounge for yet another red carpet disembarkation and tourbus roundup.

On the ride over, I fixed my botched makeup job while our guide, Vidur, explained that Shah Jahan (aka, “Ruler of the World”) had built the Taj as a monument of love for his favorite queen, Mumtaz Mahal. As the story goes, the emperor was so heartbroken after Mumtaz died that he ordered his court into mourning for two years, during which time he planned the mausoleum for his beloved. It took 22 years and 20,000 laborers and craftsmen from all over the world to build it. And a heck of a lot of rupees. 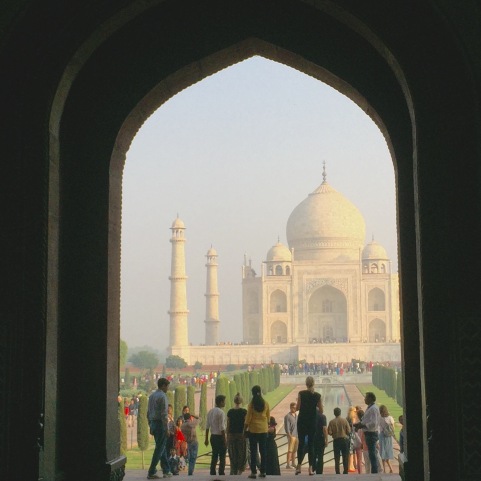 Vidur recited into his microphone: “The Taj Mahal has a story that has been melting the hearts of millions since the beginning of its construction in 1632. I think you will agree that Sir Edwin Arnold best describes it as ‘not a piece of architecture, as other buildings are, but the proud passion of an emperor’s love wrought in living stones.’” He prattled on with all the details, but frankly I’d come to find his twisty handlebar mustache, worn by men of the warrior caste, much more interesting than his made-for-tourists love story.

Call me a cynic, but the fairytale romance sounded Bollywood to me. So far we’d heard a lot about the Mughal emperors and their monolithic empire. How they’d plundered the land and destroyed Hindu temples and violently wrested control of India. And I knew that these fellows had not only several wives, but also harems so substantial that only their egos rivaled them in size. I wanted to believe this love story, but what kind of true love is an egomaniacal emperor capable of bestowing upon one of his countless beloveds?

When we returned to the train after our tour and a champagne breakfast and a quick palm reading (lucky color: yellow; lucky number: 9), I looked up the Taj Mahal in a book I’d bought in New Delhi. The bookstore owner had suggested it as a primer for understanding India. Written by Tarun Chopra, The Holy Cow and Other Indian Stories had plenty to say about Mr. Ruler of the World, who was born Prince Khurram. 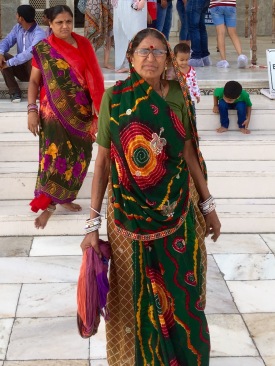 First of all, the prince and Mumtaz met cute at a bazaar. Mumtaz was selling sugar crystals (mishri), and the prince, silly guy, thought they were diamonds and whipped out a stack of bills to pay for them. They laughed and flirted coyly, and before you know it Shah Jahan vowed to make Mumtaz his queen. Unfortunately, they were only fourteen and fifteen years old (he wasn’t yet considered one of the greatest Mughals ever), and he had another queen he had to marry first; but five years later he made good on his promise and then proceeded to keep his new wife pregnant nonstop for the next nineteen years. Mumtaz died in 1631 giving birth to their fourteenth child, which makes one wonder if the Taj might stand as a monument of guilt for the incessant childbearing he put this favorite queen through.

Anyway, he took his true love’s death pretty hard and holed up for two years. They say his hair even turned white from grief. He must have done some serious emotional processing, though, because when he emerged he was ready to get down to business—and not just on building the Taj Mahal. He dove right into a Charlie Sheen lifestyle. And—like Charlie—he wasn’t particular about the backgrounds of his goddesses. When he sent his eunuchs out to scout for fleshly delicacies, he instructed them that “the sweets should be tasty; it doesn’t matter what shop they come from.” 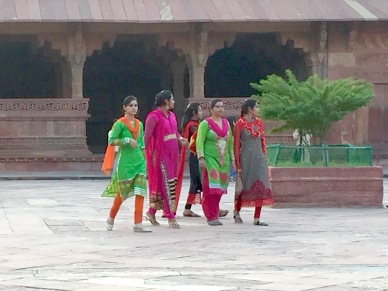 The eunuchs apparently hit a lot of shops, because Shah Jahan ended up with a harem of 5,000 females. Which makes it no surprise that he eventually overdosed on aphrodisiacs and became deathly ill. It also happens that he had a nasty opium addiction that left him out of his mind most of the time. Such a winning! combination made the arrogant and incompetent emperor vulnerable to a takeover by his son and successor, Aurangzeb, who imprisoned him in Agra Fort for eight years, until his death in 1666. Shah Jahan was then interred next to Mumtaz in the Taj Mahal, where to this day he still disturbs the perfect symmetry of his wife’s mausoleum and its gardens.

Despite the imperfection, no one can deny the absolute beauty and mastery of the Taj Mahal from an architectural standpoint. It’s every bit as stunning as it looks in the countless photographs tourists have taken of it. And by some accounts it’s one of the Seven Wonders of the World. So what would Shah Jahan say if asked whether he built the Taj as a monument to love, or as a masterpiece that would forever immortalize his emperorship? Maybe he’d put a Sheen on it and say, “What do you mean, you troll? Either way, I’m bi-winning. I win here, I win there.” An apropos response, considering its symmetry. 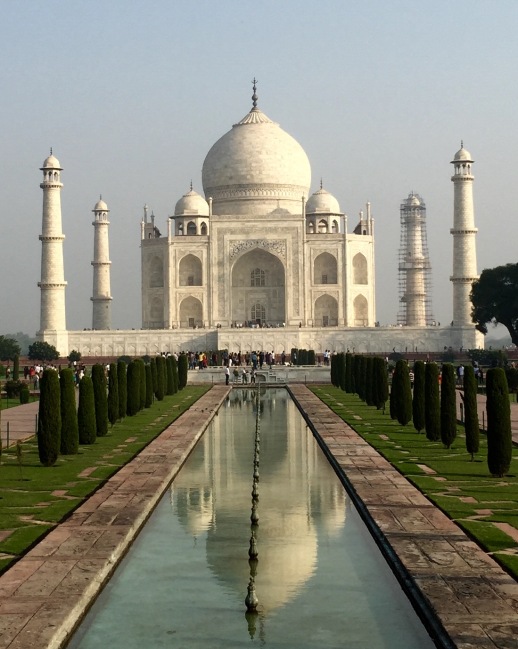